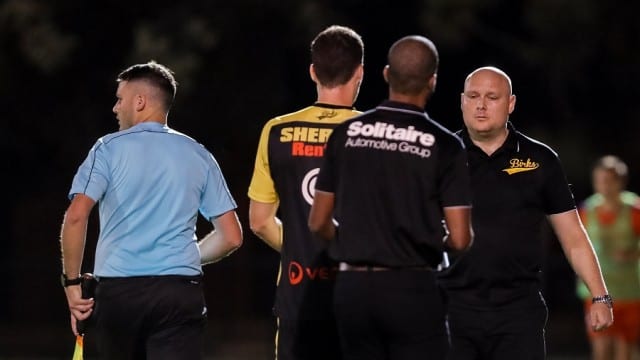 Birkalla make it 3 in a row

West Torrens Birkalla picked up their third win in as many games on Sunday, defeating Adelaide United Youth at their home ground, Smith Partners Stadium.

Jake Monaco opened up scoring moments before half time and a goal from United early after the break levelled the field at 1 a piece before striker, Fumiya Suzuki, secured the win for Birks in the 64th minute care of a penalty.

Senior Coach, Simon Catanzaro, says that the recent success is due to continued belief from his group.

“I am very pleased to come away with 3 points against Adelaide United,” he said. “The belief and morale of this particular playing group has been tested since I took charge day one with all the changes taking place at the club on and off the field.

“They (the playing group) have proven thus far to be resilient and adaptive to change in trying times with change of training locations whilst our home ground is being reconstructed so full credit to them; I am of the belief this has brought the squad together and everyone working for each other.”

Sunday sees a game at ‘home’ against Adelaide Comets, who have also hit some form of late and sit in 4th place. The last time the two sides met, Comets picked up maximum points in a 3-0 win, however Catanzaro is aware that a different side will suit up for Birks on Sunday than in Round 1.

“We are facing a red-hot Adelaide Comets this weekend but with a much different team to what we started with the first time we played them this year,” he said.

“We know how they play, what they’re strengths are and will work on the training field this week to help maintain these areas of Comets’ game whilst also trying to improve our game with the ball also.”

Sunday also marks kick-off in to the second half of the season and it would appear that Birks are finding the form they need at the right time.

“We were very underdone at the start of the season regarding key personnel changes on the field but stuck to our direction we are taking and not panicked with what we are trying to create and establish this season and the squad is now gelling well with a good mixture of experience and youth,” said Catanzaro.

“We will really attack this second half of the season knowing we are a chance of taking points realistically every game we play.”

Support all 3 grades on Sunday at Adelaide Shores Football Centre, kick-off from 11:00am!