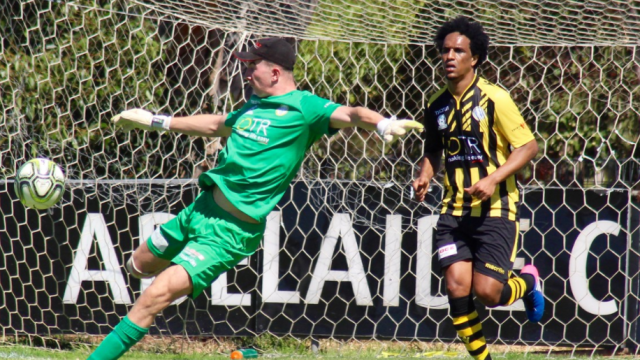 Birkalla fell to Campbelltown City on Saturday in Round 6 of the National Premier League SA, with the score line 3-0 at full-time. A red card to Captain, JP Cirillo in the 45th minute reduced Birks to 10 men for the second half.

Senior Coach, Simon Catanzaro, notes that Campbelltown were impressive but he was pleased with his sides resilience.

“Campbelltwon are the best team we have played,” he said.

“They had too much quality for us on the day and the red card hurt us. In saying this, our second half with 10 men was a fantastic effort to keep them to only one goal. The squad really dug in and made it difficult for them.”

With a third of the season in the bag after the upcoming round, Catanzaro remains confident that there is still plenty to achieve.

“It’s quite obvious we are going through a rebuild and it’s going to be tough this season,” he said.

“It’s a new squad, a lot of younger players are getting an opportunity to play Senior football, probably before they are ready for it, but what a fantastic experience for them and a great challenge for me and the coaches to coach us out of this current scenario we are in.

“A few more experienced players that come into this squad will only benefit the playing group on the park.

“Right now, we have played the top 5 teams on the table out of 6 rounds played; the next 6 weeks will define our season playing against the teams around us.”

Round 7 will see Birks travel to The Paddocks and take on Para Hills Knights, who are fresh off a loss to Adelaide Comets in Round 6 on Monday night. The message from Catanzaro is simple:

“Every game is a must win. This week is no different.”

Travel with the team and enjoy a full day of football on Saturday with the Under 18s on at 11am, Reserves at 1pm and Seniors at 3pm.