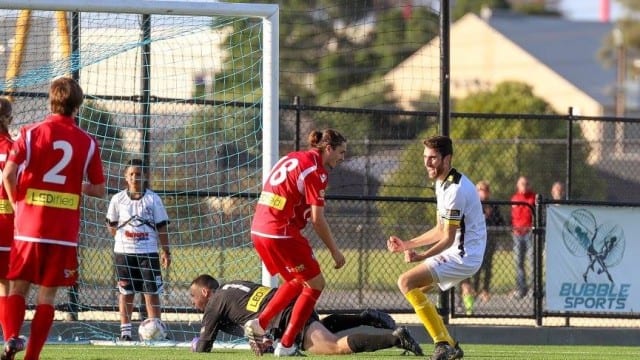 Sensational Birks go all out for six, and came out high-flying in the second half to secure a much-needed 0-6 win over Adelaide United in Round 10 of the PlayStation 4 National Premier Leagues at The Parks Football Centre on Saturday.

Although it was a dominating first half performance for the Reds, countless chances could not be converted into goals for the hosts.

West Torrens Birkalla made the most of their chances, as a free-kick saw Adelaide concede late in the first half where Taro Kawamura latched on with a header to send it home over the top of Isaac Richards.

Two goals in the second half for Davide Zerillo and Fumiya Suzuki, and a goal to defender, Adam LeCornu, sealed the deal for Birkalla.

In a physical and fiery encounter, it was evident that both sides desperately wanted, and needed, the three points to help boost their campaign.

In the opening minutes, the Reds gained ascendency and had majority of possession, looking the better side.

A Hamish McCabe pass to Ryan Strain was perfect, but the forward was forced out of the area due to Birkalla’s defensive pressure.

More chances for Adelaide flowed, when Blake Carpenter intercepted a pass, to then send a long ball in the path of Apostolos Stamatelopoulos, whose header was wide off the mark, despite an open goal opportunity to take the lead.

On the counter-attack from an evaded United corner, Lawrence D’Arrigo stuck from 20 yards, but was blocked by Zak Waters.

A threatening Jake Monaco cut through the defence with a menacing run, but Richards was able to keep his ground to save.

Pacifique Niyongabire was able to get a hit towards goal, but his effort was punched away but Birkalla gloveman, Joe Gauci.

In the 43rd minute, Oliver Zafiridis sent a pin-point free kick for Kawamura to take the lead.

It was all Birkalla in the second half, as Zerillo doubled the advantage in the 53rd minute.

A prevailing Zerillo assisted gave Suzuki his first goal and to make it 0-3 to the visitors.

In the 64th minute, Zerillo bagged his brace, slotting past Richards with ease.

The last goal for the match came from LeCornu’s header, into the bottom-left corner for a 0-6 win.

Captain John-Paul Cirillo said Adelaide United are a quality side, but it was Birkalla who weathered the storm to make the crucial breakthrough for their dominant second half.

“Playing Adelaide United is always tough, they are young and energetic, and they had a good win last week against Croydon, and also against MetroStars,” he said.

“Getting that second goal, definitely opened up the game for us and it went our way from there.

“United really pressed us in the first half, I think we weathered the storm, and we got the breakthrough, which set us up nicely for the second half going 1-0 up.

“We knew they were going to come out in the second half chasing the game and give it to us, but as I mentioned, getting that second goal was the icing on the cake.

“We have a few huge games coming up, and we will try and get back into the top six, and just prepare for the big few weeks ahead of us.”

Head Coach, Steven De Giovanniello said the match was a must-win after feeling the pressure for that past few weeks, but he believes their break out has finally arrived.

“We have been under a bit of pressure the last few weeks, as we haven’t got the results we deserved, some games we were well-beaten, but I think we were threatening to do this,” he said.

“We have the team to do this, and I kept on saying that this game was going to be the break-out game for us, where it all comes together and we start scoring goals.

“And it has come, which is fantastic to see, and we have made a hard slog out of it.

“We have some new players and it has taken a bit longer as I would’ve hoped but hopefully this is the game to really project it and kick-start our season.”

De Giovanniello echoed the belief that they weathered the storm, and it was a relief to see his side be the ones to be on the front foot, and not the other way around.

“I think we weathered the storm for the first 20 minutes, I think Adelaide United really came at us and pinned us in our half.

“And that’s been what has happening to us in recent games, and it really deflates you, but as for today, the shoe was on the other foot and we were able to hold off and then snatch something.

“The confidence just lifted and we ended up scoring six goals in the end which was great to see.”