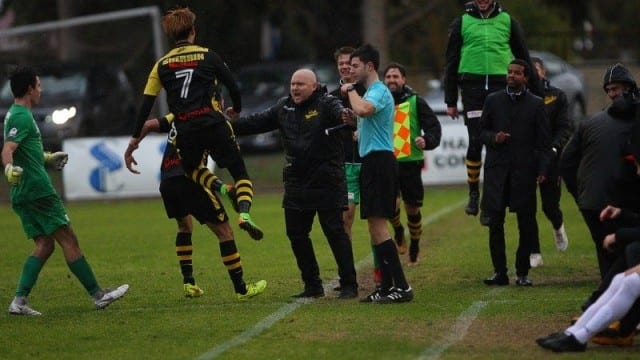 Fighting spirit shown in 4 all draw

Birkalla left Polonia in Round 15 of the National Premier League SA with mixed, but solid results. A win for the Reserves, impressively in the dying minutes of their match, and draws for both the Under 18’s and Seniors.

In the Senior grade, a 4-4 result was looking unlikely with the team down 4-1 in the second half and reduced to 10 men.

Goal Keeper Coach, Neil Tate, told that in a difficult game the side showed resilience.

“The weather conditions made the game difficult for both teams,” he said.

“We lost concentration at key moments and conceded goals we should’ve been able to defend.

“The team spirit and character to come back with 10 men was outstanding. The coaches have worked hard to try and help the group develop this belief within themselves.”

Heading in to the business end of the 2018 season, Tate tells that the message to the playing group is clear.

“Finals football is possible,” he said.

“Work hard, prepare professionally and play without fear. When this happens the team can match it with any other team in the league.”

Attention now turns to Round 16 against South Adelaide, who coincidentally finished their previous Round with an identical score line to Birks in their match against Campbelltown City.

“We are anticipating a tough, physical encounter that we expect to win against South,” said Tate.

“We need to show the same desire and attitude we displayed against Croydon. If we do, I am confident that we will be successful.”

Support your Birkalla this Sunday in Round 16 at The Parks Football Centre.