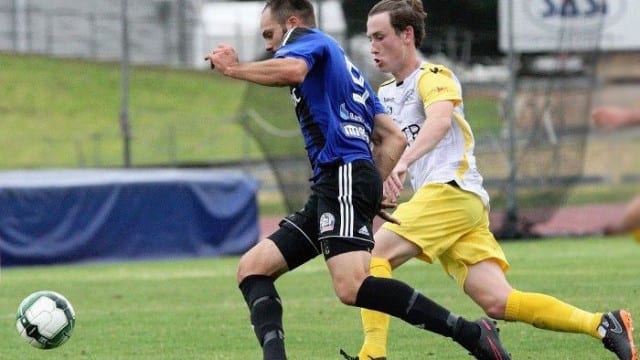 Senior Coach, Simon Catanzaro, said that the 3-0 loss was disappointing.

“I was disappointed not to get anything out of the game, especially being Round 1,” he said.

“We had a plan to go to SA Athletics Stadium and make it hard for them (Comets) to break us down, which was working to plan until the contentious penalty and send off in the 70th minute, but that’s football.”

The penalty resulted in Oliver Zafiridis being sent to the change rooms and Birkalla reduced to 10 men for the remainder of the match.

Catanzaro tells that despite this occurrence, the encounter showed promise.

“Copping 2 goals late in the game, whilst chasing the game, doesn’t concern me one bit,” he noted.

“I want my players to believe they are always a chance of getting something out of the game irrelevant to the situation.

“What we got out of the game was a Senior starting debut to a 17-year-old, Chris Ashwood, and 18-year-old, Anthony Quici, both in the heart of defence due to injury and an international clearance not coming through for one of our VISA spot players, Preston Bremus.

“Chris and Anthony should hold their heads up high and be proud of their performance against the League’s best team.

“We will get some of our Senior players back in the squad when they are match fit in the coming weeks, but I am not in a position to rush anyone back into the squad underdone at this time of the season.

“We are a new squad and have had a great preseason together and that’s what will hold us in good stead later in the season.”

Focus now shifts to Round 2 and the first home game of the season, to be held at Adelaide Shores Football Centre

Catanzaro will make the necessary adjustments to prepare for MetroStars, who are also coming in to Round 2 off a loss in Round 1.

“We are at home and we will tweak our game plan in relation to our opponent this week,.” he said.

“We are hurting from our first up loss so I will be looking to my Senior players to drive a competitive week on the training track and more importantly, taking that attitude to the game on the weekend.”

Support your Birkalla this Sunday at The Shores from 11am.