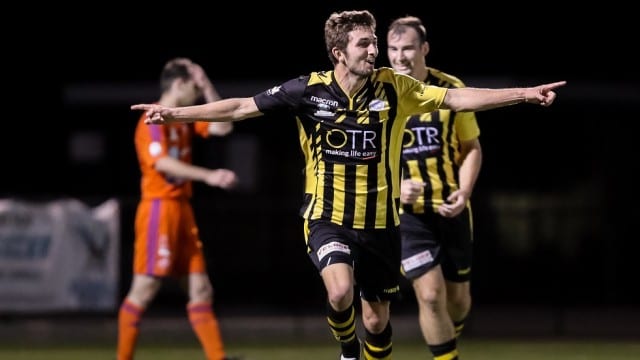 Birkalla picked up their second win of the season on Sunday, a crucial 3 points against Sturt Lions at Adelaide Shores Football Centre.

Two goals secured the win, the first from Doni Pollock, his first of the season, and a second in the 85th minute from Will Plush.

Assistant Coach, Emanuel Pais, said that the win left him and the side happy and motivated moving in to Round 10 this coming Saturday.

“It was a great win to boost our team’s morale and move us one place higher on the league table,” he said.

“Being 3 points away from 8th position gives us extra motivation for the rest of the season. The win changed the overall mood of the club immediately, and that’s football.”

Saturday night, Birks will take on Adelaide Olympic at The Parks Football Centre. Olympic currently sit in 7th place after a draw in Round 9.

Pais acknowledges that the Sturt win will help with confidence going in to another must-win encounter.

“The boys have been playing well and Sunday’s win gives us an enormous boost for future games, this one included; we expect to get more points in this match,” he told.

“Every game will be a battle and every point is needed. The boys and coaches are getting things done in training, always preparing for the next game.”

An addition to the side in future will be former Adelaide Blue Eagles player, Chris Atsikbasis. Pais is confident in Chris’ abilities and believes he will make a strong contribution to the team.

“Chris is an experienced defender, strong in the air and a good ball winning central defender with a willingness to work and be part of the Birks project.”

“Chris has adapted quite well at training and is looking forward to being a part of the game now.

“We have been playing with young players in the heart of our defense and Chris’ experience will guide our youth players in the process of their development too.”