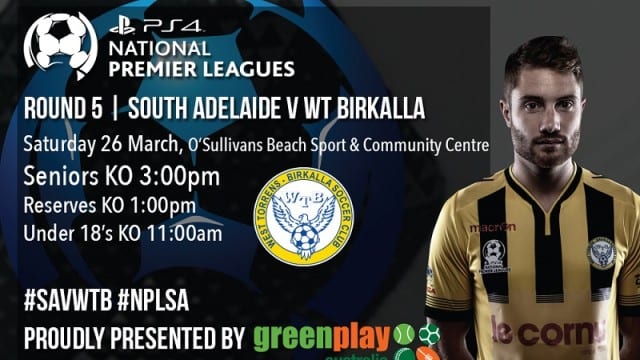 After last week’s 3-0 drubbing of Olympic away, Birkalla will be after their second win on the trot over South Adelaide, a team with a fortress of a home ground.
A win, this week, is an absolute must for Birkalla, who are surrounded by four other teams – Adelaide Blue Eagles, West Adelaide, Adelaide City, Adelaide United –also on seven points.

“Every point counts, as we found out by missing out on the championship by three points last season.”

When considering the tight top half of the league – last season – he says, it places a great deal of importance on maintaining consistency, in every game this year.

“Not just this game, but every game is important … we need to have the same attitude in every single game.

“South Adelaide are strong and fit, and they have a lot of determination, if we can match that we can walk off the pitch with three points.”

They will be without their zealous dangerman – Paul Radice – this week, after the young striker was shown a straight red against Adelaide Olympic, last week.

However, the squad supposedly has enough depth to fill Radice’s place, and returning striker, Watson, hopes he can be the one to do so, if given the chance.

“With Radice suspended, I would hope I’d get a spot, but I have to be patient … it’s not going to be easy because we have a good squad and good depth.”

Watson, 24, says he is eager to make his season debut after a lengthy groin injury, which kept him sidelined for the first four rounds, this year.

“I tore my groin in training, two weeks before the season started.

“I’ve been with the reserves the last two weeks, and I’ve played full 90’s.

“I’m ready to go, and I’m waiting for the call up … I just have to wait for my chance and take it.”

South – regardless of their position on the table – can be very unpredictable, especially at home.

Birkalla know this, and they are well aware that South – in the past – have beaten some high quality sides, so they have prepared for this week’s game with a degree of caution.

“If you looked at them around this time last year, they were in a similar position.

“Towards the end of last year, they gelled well and went unbeaten, beating teams like West Adelaide, and Campbeltown, so you can’t judge a team on where the are in the league.

“Different teams play different ways, you have to react to it well, and if they’re dominating within the first ten minutes, the manager should be able to work around what they’re doing, and try to counter it.”